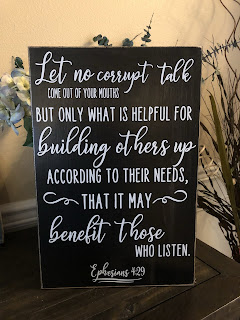 In the book of Proverbs, Solomon shared his wisdom by saying “A word fitly spoken is like apples of gold In settings of silver” (Proverbs 25:11). Good speech might be defined as the expression of thought in well chosen words. We should know and understand that people are judged by the words they speak and by what they do. These are the two things we have by which to know the mind or heart of others. Jesus said, “Brood of vipers! How can you, being evil, speak good things? For out of the abundance of the heart the mouth speaks” (Matthew 12:34).

The importance of good speech was emphasized by the apostle Paul. “Let no corrupt word proceed out of your mouth, but what is good for necessary edification, that it may impart grace to the hearers” (Ephesians 4:29). Solomon also let us know the importance of choosing our words carefully; “Do you see a man hasty in his words? There is more hope for a fool than for him” (Proverbs 29:20).

The act of choosing our words wisely is important based on what Jesus said in Matthew 12:36-37. “But I say to you that for every idle word men may speak, they will give account of it in the day of judgment. For by your words you will be justified, and by your words you will be condemned.” All of us need to make sure that we are very careful with the words that we speak. The fact is – God hears us and we will give an account of our words at the great judgment day. Remember, anyone can use profanity and act foolishly, but the wise individual will think before speaking, making sure that their speech imparts grace to those who hear (Ephesians 4:29).

Posted by Richie Thetford at 11:40 AM No comments:

The story is told of a clever woman named Martha Berry who started the Berry School in Rome, Georgia, by scraping together funds from every source she possibly could. One day she asked Henry Ford for a contribution. Patronizingly, he reached into his pocket and pulled out a dime. Rather than be insulted or discouraged by the “gift,” Miss Berry bought a package of seed peanuts with it. The seeds were planted and tended, and they yielded a large crop of peanuts which Miss Berry sold. Again she called on Mr. Ford. “Here’s the dime you gave me last year,” she said handing him the coin. Then she told him of the return she had realized from his meager investment. Ford was so impressed that in the years that followed, he gave millions of dollars to the school.

Now, who was clever? The woman who took a meager dime and spent it wisely for the school, or the man who recognized her potential and invested a great amount in a worthy cause?

A. R. Bernard once said "Life is God’s gift to us; what we do with it is our gift to God."

The apostle Paul wrote the following: “God, who made the world and everything in it, since He is Lord of heaven and earth, does not dwell in temples made with hands. Nor is He worshiped with men's hands, as though He needed anything, since He gives to all life, breath, and all things. And He has made from one blood every nation of men to dwell on all the face of the earth, and has determined their pre-appointed times and the boundaries of their dwellings, so that they should seek the Lord, in the hope that they might grope for Him and find Him, though He is not far from each one of us; for in Him we live and move and have our being, as also some of your own poets have said, 'For we are also His offspring.' Therefore, since we are the offspring of God, we ought not to think that the Divine Nature is like gold or silver or stone, something shaped by art and man's devising. Truly, these times of ignorance God overlooked, but now commands all men everywhere to repent, because He has appointed a day on which He will judge the world in righteousness by the Man whom He has ordained. He has given assurance of this to all by raising Him from the dead” (Acts 17:24-31).

What are we doing with the life that God has given us? Have we stopped living for ourselves and started to live for Him — demonstrating true repentance?

We all must realize that we will be judged by how we have lived our lives on this earth. “For we must all appear before the judgment seat of Christ, that each one may receive the things done in the body, according to what he has done, whether good or bad” 2 Corinthians 5:10).

There is a Gospel Hymn that many of us have sung over the years entitled “All To Jesus I Surrender.” Have we really surrendered all to Jesus? It is important that we consider the value of our soul and turn our life over to God now before it is everlastingly too late. God knows our potential. Therefore, we must use it for Him!

Posted by Richie Thetford at 1:48 PM No comments: