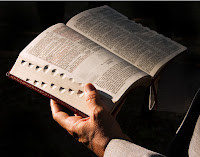 All men must recognize the need for authority in all things that we do. If you were to take your vehicle to an auto mechanic and instruct him to put in some spark plugs but he also worked on the transmission and gave you a bill for $2,800.00 because he felt that you needed a new transmission, you know that he did not respect your authority. Since you did not authorize that work to be done, you have no obligation to pay for that transmission. If you instructed for your living room carpet to be replaced with blue carpeting before you went away for the day and returned to find that not only was the living room carpet replaced but two bedroom carpets were replaced with green carpeting, your authority was once again ignored because carpet was added and color was changed without your authority. If a gasoline station were to guess at what to charge you rather than measure out the gasoline by a definite standard gallon, you would be upset. ALL men recognize the need for authority in secular matters. But what about religion? Don’t you think God has given man a standard to go by in the realm of religion? The Bible says: “All Scripture is given by inspiration of God, and is profitable for doctrine, for reproof for correction, for instruction in righteousness, that the man of God may be complete, thoroughly equipped for every good work” (2 Timothy 3:16-17).


The Bible Teaches The Need For Authority
Jesus performed many signs, wonders, and miracles, prompting people to come to Jesus and ask Him, “By what authority are You doing these things? And who gave You this authority?” (Matthew 21:23). These people recognized that authority is needed. In Colossians 3:17, the Bible teaches “And whatever you do in word or deed, do all in the name of the Lord Jesus.” All the things in which we DO in WORD (what we teach) and in DEED (what we practice) must be done in the NAME OF THE LORD (which means by the Lord's authority). To do something in anyone's name means to do it by that persons authority. To go beyond the doctrine of Christ (2 John 9) is to do something without the authority of Jesus Christ (Galatians 1:6-9).


What Does Religious Division Stem From?
Anytime that two individuals disagree on anything religiously, the religious disagreement stems from: (1) A lack of respect for the authority of Christ or (2) An ignorance of how to establish proper Bible authority. There is no excuse for anyone who disrespects God's authority. In the denominational world today many examples of "disrespect" for God's Word can be seen. The attitude is, "wear my name," or "have the kind of music that pleases you," and "let the church be any kind of organization which pleases the people." There have even been others who have gone so far as to say '"we don't need Bible authority for everything that we do." However there are some today that do respect God's Word and desire to do all things that are pleasing to Him! These are the type of individuals that we need to have fellowship with.


Respect For Authority
The Old Testament is filled with example after example showing us how we should have a genuine, fearful respect of God's authority. In Leviticus 10:1-2 it says: “Then Nadab and Abihu, the sons of Aaron, each took his censer and put fire in it, put incense on it, and offered profane fire before the LORD, which He had not commanded them. So fire went out from the LORD and devoured them, and they died before the LORD.” We can clearly see that these two added to God's Word. They did not respect His authority. We can also see examples of this in Cain and Abel (Genesis 4:2-9), King Uzziah (2 Chronicles 26:9-21), and Uzzah (2 Samuel 6:3-8). All of these examples are for our learning (Romans 15:4) and demonstrate to us that we must have respect for the authority of God in all that we do religiously.


How Can I Establish Bible Authority?
There are three ways in which to establish Bible authority. The first is command, which is a positive statement or a requirement. An example of a command can be found in Mark 16:16. The second is approved apostolic example. The New Testament example of this type of Bible authority can be found in Acts 20:7 where we are told when to take the Lord's Supper. The third way to establish Bible authority is necessary inference, which is something that is implied by scripture. An example of this can be found in Matthew 3:16 which says: “When He had been baptized, Jesus came up immediately from the water; and behold, the heavens were opened to Him, and He saw the Spirit of God descending like a dove and alighting upon Him.” This verse states that Jesus “went up” from the water. How do we know that He went down into the water? The answer is inference. In Hebrews 10:25, an ASSEMBLY is commanded. By inference a PLACE to assemble is required. In order to be pleasing to God we must ensure that we are doing all we do religiously based upon His will and not man’s traditions.

Posted by Richie Thetford at 3:37 PM No comments:

As a child growing up I recall my mother reminding me that I should be a "good example" because others are watching me and what I do may have a direct influence on their lives. As I look back, I remember looking to others as examples to follow, especially those in the church that were always consistent in their teaching, attendance, and love for the Lord. One never knows when someone else is watching us and in some respects patterning their lives after some of the things that we do. Therefore, we must strive to be the best example that we can possibly be.


The Example of Jesus Christ
The greatest example of all is Jesus Christ. We have been called to "follow in His steps" as stated in 1 Peter 2:21. If we truly want to pattern our lives after someone that was perfect, without any sin (1 Peter 2:22), then Jesus is the one that we need to have as our example. When things happen in our lives that upset us we may try to think of various ways to get back at those that caused us to be upset. Jesus is the one that we need to turn to when things are not going as we would like, because we can trust in Him and learn some good things from His example.  Peter wrote: "and while being reviled, He did not revile in return; while suffering, He uttered no threats, but kept entrusting Himself to Him who judges righteously; and He Himself bore our sins in His body on the cross, that we might die to sin and live to righteousness; for by His wounds you were healed" (1 Peter 2:23-24). Yes, Jesus was and is the greatest example of all!

Posted by Richie Thetford at 6:44 PM No comments: