The Lack of Knowledge 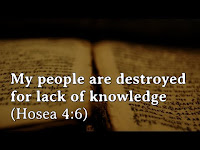 Hosea wrote: “My people are destroyed for lack of knowledge. Because you have rejected knowledge, I also will reject you from being priest for Me; because you have forgotten the law of your God, I also will forget your children. The more they increased, the more they sinned against Me; I will change their glory into shame” (Hosea 4:6-7). God became very angry with the children of Israel because they continually rejected the knowledge, the law that they had received by God. As a result of this rejection to do what was right, God destroyed the children of Israel.


God Laid Down the Law

Long, long ago, God laid down the law for man. From Adam to Jacob God had taught Israel through the Patriarchal law. In Genesis 18:17-19 it says: “And the LORD said, "Shall I hide from Abraham what I am doing, since Abraham shall surely become a great and mighty nation, and all the nations of the earth shall be blessed in him? For I have known him, in order that he may command his children and his household after him, that they keep the way of the LORD, to do righteousness and justice, that the LORD may bring to Abraham what He has spoken to him.” We can see where God gave instructions (knowledge) to Abraham on how he was to command his children and his household after him. Abraham was to make sure they kept God’s way, ensuring that they were doing what was right. Later, God laid down the Mosaical Law that was in effect from Moses all the way until Christ died on the cross. We learn from Galatians 3:23-24 that the law was the teacher to bring man up to the point of Christ. “...we were kept under guard by the law, kept for the faith which would afterward be revealed. Therefore the law was our tutor to bring us to Christ, that we might be justified by faith.” However, during these two periods of law that were given by God, man did not always heed God’s commands and therefore, many were destroyed because of their lack of knowledge!


Lack of Knowledge Displayed By Actions

In the Old Testament we can read in several places things that God’s children did that showed a lack of knowledge. In Proverbs 22:6 we can read where the parents did not train up their children properly. Parents, we have been given knowledge today on how to raise our children. Children are to be brought “up in the training and admonition of the Lord” (Ephesians 6:4). Have we learned anything from God’s people of old? Are we taking the knowledge that God has given to us and using it properly in this area, or are we lacking? In Judges 6:13,25 we can read where they had idols in their homes. Do we have idols in our homes today that keep us from gaining Bible knowledge? We can read earlier in Hosea 4:1-3 that the families were too involved in the affairs of life, and did not gain the knowledge to do what was right, even though it was offered to them. Are we ignoring God’s word to us and getting caught up in the affairs of life? In Second Chronicles 34 we can read where God’s people “lost the book!” How could they gain knowledge if they didn’t even have “the book?” Can you find God’s book in your home today? Is it put aside on Sunday and looked for diligently just before you run out the door on the way to services the following Sunday?

In many ways God’s people today are not much different than His people of many years ago. In both cases many have a lack of knowledge of God’s commandments because they do not WANT to set the time aside to learn and practice God’s will. What happens to individuals that are lacking in knowledge? They are destroyed! If our actions say “I’m rejecting knowledge”, then we need to change before it is everlastingly too late! Gaining the knowledge of God is not a mystery. We are commanded to “Be diligent to present yourself approved to God, a worker who does not need to be ashamed, rightly dividing the word of truth” (2 Timothy 2:15).
Posted by Richie Thetford at 8:09 PM No comments: 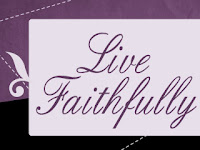 We can read in the second book of Timothy where the apostle Paul exhorted young Timothy to live a faithful life unto the Lord. The instructions that he gave him are inspired instructions for us today. Let’s look at this passage of scripture and then I’ll make some comments regarding some of the things that Paul points out. “You therefore, my son, be strong in the grace that is in Christ Jesus. And the things that you have heard from me among many witnesses, commit these to faithful men who will be able to teach others also. You therefore must endure hardship as a good soldier of Jesus Christ. No one engaged in warfare entangles himself with the affairs of this life, that he may please him who enlisted him as a soldier. And also if anyone competes in athletics, he is not crowned unless he competes according to the rules. The hard-working farmer must be first to partake of the crops. Consider what I say, and may the Lord give you understanding in all things. 22) Flee also youthful lusts; but pursue righteousness, faith, love, peace with those who call on the Lord out of a pure heart. But avoid foolish and ignorant disputes, knowing that they generate strife. And a servant of the Lord must not quarrel but be gentle to all, able to teach, patient, in humility correcting those who are in opposition, if God perhaps will grant them repentance, so that they may know the truth, and that they may come to their senses and escape the snare of the devil, having been taken captive by him to do his will” (2 Timothy 2:1-7, 22-26).

When we are determined to study God’s Word and to apply His teaching in our life, then we will be able to endure hardship. No matter what Satan throws our way, we will be able to overcome. We can never walk in the steps of the Savior if we don’t learn what it is that we must do to walk in His steps. Jesus said: “Come to Me, all you who labor and are heavy laden, and I will give you rest. Take My yoke upon you and learn from Me, for I am gentle and lowly in heart, and you will find rest for your souls. For My yoke is easy and My burden is light” (Matthew 11:28-30). He has promised us that if we will take up His yoke, and learn about Him, then we will find rest for our souls. The faithful man of God is the one that really trusts in the Lord and counts on Him to deliver the faithful from the Devil.

Paul explains to Timothy (and to us), that we must endure hardship if we are to be counted worthy of Christ. A soldier of Christ is one that will do whatever it takes to please Him. If we are honestly, sincerely striving to please Jesus, then we WILL NOT get involved with the various affairs of this life which do not promote good, honest, Christian living. We should be busy pleasing our Lord!


Correct Those Who Are In Opposition

A faithful Christian who cares about the souls of others will do what they can to correct those who are in opposition to the truth. Sometimes this is not pleasant but must be done so that they may see their error, repent, and escape the snare of the Devil. Remember, if you are ever corrected by a loving saint, count it a blessing, because they care for your soul.
Posted by Richie Thetford at 2:21 PM No comments: