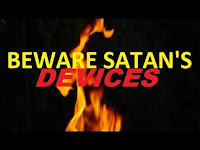 One thing that we should learn is not to be ignorant of Satan’s many devices. We read in 2 Corinthians 2:11 “lest Satan should take advantage of us; for we are not ignorant of his devices.” We need to realize that Satan is constantly trying to find out what it is that can carry us away from God. But if we stay tuned into the Word of God then we will be less susceptible to falling for his devices. Satan prefers to have good company (Job 1:5), and is always ready and willing to tempt the children of God. Remember Eve? Who did she quickly put the blame on when she was tempted? It was Satan, disguised as a serpent! Later, Satan came to tempt the Son of God, asking Him to “command these stones be made bread” (Matthew 4:3). Jesus did not succumb to Satan’s temptation as he responded with “it is written”. Jesus, the Son of God, in the form of a man, knew about Satan’s devices and was not about to sin.


Satan is the Prince of the World
Jesus is our Prophet, Priest, and King, but Satan is the Prince of this world! There is nothing that Satan would like better than to get you and I wrapped up in the materialistic things of his worldly kingdom so that our minds will be made distant of doing those things that will please our Father. Do you think he’s succeeding? Sure he is, and its because man does not think enough about his soul to be concerned about where it will end up! We better make sure we are doing everything possible to ensure that we are going to heaven because Satan certainly will not be there (John 12:31).

All Satan does is cause war. He has the power to just annoy! The apostle Paul wrote: “For we do not wrestle against flesh and blood, but against principalities, against powers, against the rulers of the darkness of this age, against spiritual hosts of wickedness in the heavenly places” (Ephesians 6:12). Man wrestle’s within himself because Satan is doing everything possible to lead us away from God.


Satan is a Deceiver and a Murderer
We need to recognize who Satan is and what he is all about. The student of God’s Word will know the things that are pleasing to God and then realize that anything contrary to God’s will is something Satan would not only approve of, but try to get us to do! Jesus said: “You are of your father the devil, and the desires of your father you want to do. He was a murderer from the beginning, and does not stand in the truth, because there is no truth in him. When he speaks a lie, he speaks from his own resources, for he is a liar and the father of it” (John 8:44). Satan is nothing but a liar! When someone tries to sweet talk us into doing something that we KNOW is contrary to Bible teaching, it is Satan’s deception at work.


Satan is a Hindrance to Our Salvation
Oh how much easier it would be to stay on that straight and narrow road to heaven if Satan wasn’t in the way! Notice what the Bible says concerning Satan’s hindrance to our salvation: “whose minds the god of this age has blinded, who do not believe, lest the light of the gospel of the glory of Christ, who is the image of God, should shine on them” (2 Corinthians 4:4). He has blinded the minds of many people, keeping them from believing the truth of Jesus Christ who is “the author of eternal salvation to all who obey Him” (Hebrews 5:9). Jesus has the truth and it has been revealed to us through His gospel. Satan says he has the truth, but he is a liar! He hinders our salvation! In the parable of the sower Jesus talked about Satan as being the one who takes the word away from the hearts of those who hear the word of God, so that they will not believe the teaching of Christ and be saved (Luke 8:12).

Satan will always try to make God’s Word serve his purpose (Matthew 4:5-6). But we should always strive to resist him (James 4:7). Let us be ready and willing to fight Satan by putting on the whole armor of God (Ephesians 6:11).

Posted by Richie Thetford at 3:14 PM No comments:

What is my responsibility toward error and sin? The Bible teaches that we are to expose it. Paul writes, "And have no fellowship with the unfruitful works of darkness, but rather expose them" (Ephesians 5:11). When one sins willfully, then one is not in the right relationship (fellowship) with God (Hebrews 10:26; 1 John 5:16-17). It is very important that we are in the proper fellowship with God because if we are not, then we will be condemned. John writes, "If we say that we have fellowship with Him, and walk in darkness, we lie and do not practice the truth. But if we walk in the light as He is in the light, we have fellowship with one another, and the blood of Jesus Christ His Son cleanses us from all sin" (1 John 1:6-7). Christians need to be thinking about this on a daily basis. We must ensure that we are in fact in the proper fellowship with God. There is no room in the Christian’s life for darkness (sin). When we confessed before God that Jesus Christ is the Son of God and then were buried in the watery grave of baptism all of our sins were washed away. We arose from the water free of sin, and determined to live a life devoted in service to God. We now are living a new life dedicated to His service and determined to expose sin! Romans 6:3-11 shows us how we are now changed to live fully and completely for Jesus. "Or do you not know that as many of us as were baptized into Christ Jesus were baptized into His death? Therefore we were buried with Him through baptism into death, that just as Christ was raised from the dead by the glory of the Father, even so we also should walk in newness of life. For if we have been united together in the likeness of His death, certainly we also shall be in the likeness of His resurrection, knowing this, that our old man was crucified with Him, that the body of sin might be done away with, that we should no longer be slaves of sin. For he who has died has been freed from sin. Now if we died with Christ, we believe that we shall also live with Him, knowing that Christ, having been raised from the dead, dies no more. Death no longer has dominion over Him. For the death that He died, He died to sin once for all; but the life that He lives, He lives to God. Likewise you also, reckon yourselves to be dead indeed to sin, but alive to God in Christ Jesus our Lord". Wouldn’t it be wonderful if every Christian took their baptism and "new" life seriously, understanding that sin is no longer part of our life in any way? Every Christian should now be devoted to Christ, following in His steps, as evidenced by our every action. We need more Christians to stand up and truly be counted as loyal members of the body of Christ. Can others really see Christ living in us?

Posted by Richie Thetford at 12:10 PM No comments: 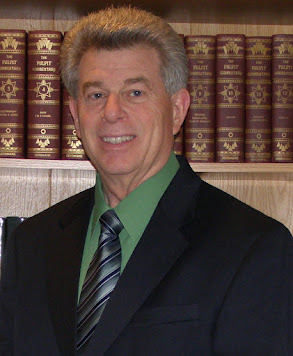